My first thought was to open either a food truck or storefront selling amazing plant-based foods to folks but as I looked at the realities of it I realized it was not a great fit.

I then thought about all the food items I began making in the dehydrator when I had a raw vegan shop and began tinkering with various plants. After much trial and error and after dozens of batches I landed on It’s Jerky Y’all, which is the future of jerky.

All Y’alls Foods exists to provide amazingly tasty plant-based snacks that traditionally involved animals. While all of our products are kind they are also much better for every body. The consumers, the cows, and Rowdy Girl Sanctuary all win as a result of our launch this week.

It’s Jerky Y’all is on Facebook and Instagram so please find us there and like us. Reach out with your suggestions, comments, or anything really. Be well and jerky on!

Taking ownership of failing to consistently and effectively communicate is not always easy but allow me at this time to do so. I have been mostly absent from my blog the past several months but have been extremely busy on developing a new company.

With my father’s transition into eternity last March I was left very sad and suddenly acutely aware of what a close and wonderful friend he had become over the years and me shedding more tears than I ever thought possible. His absence has become the new normal, he is having a blast, and I look forward to us meeting up again one day.

Over the past ten months along with my grieving I have begun to build a plant-based snack food company that will launch most likely in April. Still far too many moving pieces to know for sure just yet but it has become my passion and will likely remain so for the remainder of my life.

To offer every body amazingly satisfying snack options that do not support disease or animal involvement, with a portion of the proceeds going to support an animal sanctuary, everybody wins!

With amazing flavors and a myriad of plant-based snack options, we are poised to impact Texas largest commodity, beef.

I began this blog to support book sales and just to share information folks might otherwise never know that would support them in being well. I will continue to do so on a more regular basis and will keep you in the loop on the plant-based snack company.

Have an amazing weekend, share as you care to and be well!

This past May Johnson & Johnson was ordered to pay a woman $110 million in damages as she had contracted cancer due to her decades of use of their baby powder. There are another 2,400 lawsuits making similar claims. In other words if you are still using talc on you or your family it is time to reconsider. I wrote about this being an issue 18 months ago and have decided to reblog it below.

If cancer is something, you wish for you and those around you to avoid you should know the following. Since the late nineteenth century, Johnson and Johnson has been selling talcum powder or what you may know as baby powder and as it turns out, it can be a killer.

This week the US state of Missouri has awarded seventy-two million dollars to the family of a woman whose death was tied directly to her use of their baby powder. Their mouthpiece claimed their products are safe and deny any issue. The issue lies in both their Baby Powder and Shower to Shower products.

As it turns out, talcum powder used on a woman’s genital area can migrate all the way into the ovaries eliciting an inflammatory response and subsequent cancer. Particles of talc have shown up in the cancerous tissues removed from ovaries. More than 20 epidemiologic studies support a link between talcum powder use in the genital area and ovarian cancer.

The issue with baby powder linked to cancer goes back to 1971 when the Henderson study showed talcum powder embedded deeply within cancer tissue. More studies were held in the eighties when a Harvard doctor Daniel Kramer MD found a 92% increased risk of ovarian cancer for women using talcum powder on their genital area. In 1982, J&J challenged him about the study and he asked them to remove talcum from their products, they refused.

The FDA was petitioned in 1994 by the Cancer Prevention Coalition to add a warning label to talcum products. The FDA responded by saying they did not have the resources to look into it and even if they did it is not a priority for them. Interesting to note that the same individual that wrote that letter went to work for the lobbying group that represents J&J. This type of behavior is common practice within government agencies including the FDA.

Even wackier is the fact that OSHA has required the mining companies to post a materials safety data sheet to each container of talc sent to J&J warning of the risk of ovarian cancer with its use. One steps further into the you-have-got-to-be-kidding-me section, and you’ll find that they are already using a possible replacement, cornstarch, in other products. However I would imagine it is laden with Glyphosate from it being GMO, so I would never recommend it.

I covered the dangers of talcum powder in Chapter five of my book Nutritional Truths, and this case is still ongoing. If you or anyone you know has suffered from ovarian cancer and has been a user of J&J baby powder they may wish to reach out to the folks at the law firm of Beasley Allen. Avoid talc, enjoy your weekend and share as you may.

Two weeks ago I spoke of purchasing and utilizing my very first jackfruit and shared my ceviche recipe, and now I would like to share my “pulled pork” recipe. In the end, the particular BBQ sauce will make all the difference and found the one pictured to be a tad too vinegary, but there are others to choose from.

The jackfruit tree begins to produce fruit after four years and will produce it for up to 100 years. An average tree grows up to forty feet tall and will produce four to eight thousand pounds of fruit per year. The fruit will vary in weight from twenty to eighty pounds each and sometimes exceed two hundred pounds. 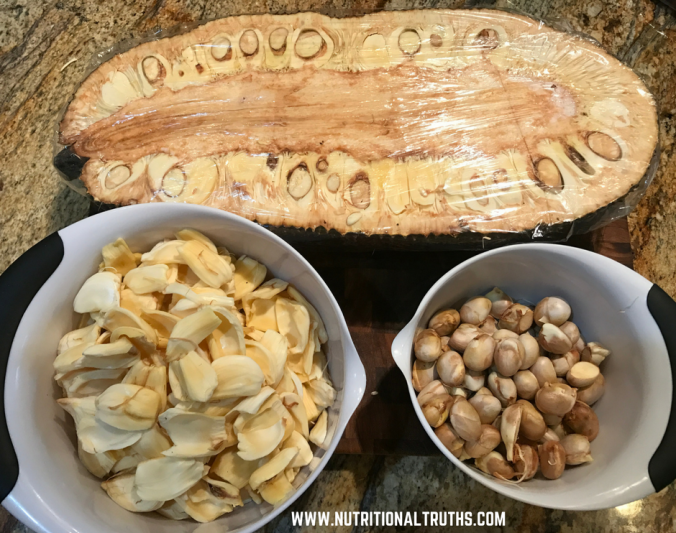 Low in calories and high in fiber Jackfruit is rich in vitamins C, Riboflavin, A, B6, and others. Its mineral content is robust as well high in Manganese, Magnesium, Copper, Potassium with smaller amounts of Calcium, Iron, Zinc, Phosphorus, and Selenium.

The seeds are very nutritious and edible too. I boiled mine in salted water for twenty minutes and then allowed them to cool to peel them. If you pan or oven roast them, it will harden the shell and make them easier to peel than just boiling them. They were very much like potatoes, and I highly recommend them!

I made the slaw using avocado rather than mayo for a myriad of reasons and also added salt and pepper, not in the picture. Any slaw recipe will work and helps to balance the richness and bold BBQ flavor of the jackfruit.

Once deseeded I sliced the pods into strips and sautéed with seasoning and broth to slowly cook and soften the flesh of the fruit. After over an hour I added the BBQ sauce and simmered it for thirty more minutes and then placed with the slaw on toasted buns and it was tasty!

Another recipe where no animal need be exploited to make great food. I did freeze some of the pods and will likely smoke them and try them with a different BBQ sauce or better yet make my own. Thanks for dropping in today share as you may and Be Well!

Heart disease, cancer, and diabetes don’t care in what month you were born. The latest Columbia University report claims the month you were born decides to what disease you’re predisposed. This is a bit hokey. Their figures are probably accurate when it comes to winter and vitamin D deficiencies, but overall it alludes to the idea that we are predisposed to disease, and it is beyond our control.

The recently released John Hopkins study that suggests unlucky people get cancer is laughable. The medical establishment and media will say almost anything to have us believe that it is not within our power to avoid disease. There are few genetic issues we cannot escape, but almost all disease is self-induced.

One of the first things I subscribe to is the belief that, as an adult, whatever we consume is our choice – from food and beverages to information and thoughts. For years, I was oblivious to just how poorly I was supplying my body with nutrients. Day after day I was filling it with toxins and “food” void of almost all nutrition. How it is I am alive and in as good health as I am, is a testament to our body’s ability to endure. Our bodies ability to heal is greater than most of us have been taught.

When it comes to nutritious food, I have a shot wheatgrass juice at one end of the food spectrum and on the opposite end I have a shot of Crisco. Wheatgrass is full of energy, minerals, chlorophyll, and enzymes. It nourishes our bodies and promotes wellness. Crisco, on the other hand, is essentially toxins that can likely only promote illness (hydrogenated GMO soy and palm oils and TBHQ, which is a form of butane).

The book, Nutritional Truths, and this blog have been written to ensure folks like you know the truth: you, more often than not, have the ability to create wellness. Kindly consider sharing this on social media and help me spread the word. I am heading into the studio next week to record the audio version of Nutritional Truths; by month’s end the audio version will be available on iTunes. Thanks for your time and Be Well!

For the first 30 plus years of my life Pluto was a planet and then one day in 2006 it was not. We grow up with certain mindsets about foods that sometimes serve us and other times do not. It depends on what you learned and picked up on growing up. For some of us fast food was the norm and for others fresh veggies filling the dinner plate was. One will support illness and the other health.

More often than not our mindset is that if someone upstream of us biologically had a disease we are predisposed to it as well. That is a lie, with few exceptions. When it comes to almost all heart disease, diabetes or cancers the fate of our wellness lies squarely on us and our behaviors. The actions include what and how much we eat and drink, how we think, exposure to toxins, and how we move.

We tend to model our parents behaviors around all these things much as we do our faith and how we handle relationships, careers, etc. So the “It’s in our genes” mentality, for the most part, is simply not true.

Great news to many who are living with the idea that moms or grandmas disease awaits them. Now if they eat, drink, think, expose themselves to toxins, and move as they did, it very well might, but they have the choice to shift those habits and outcomes.

Nutritional Truths covers these facts and much more. You are most likely not a victim of genetic fate, you just need to be clear on the facts that will serve you well. If you’re not a fan of paperbacks the book is now available on Kindle. Till next week-Be well! 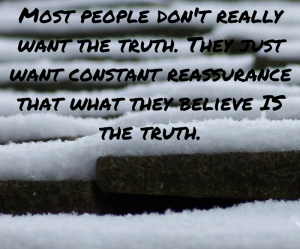